Business Insider readers already know that we like the Chevy Corvette Stingray.

We named it our 2014 Car of the Year, concluding that although it might not be the mythical Corvette of the Mind — that honor goes to the second-generation version of the car from the early 1960s or the third-gen Vette, built from 1968 to 1982 — it was certainly the best Corvette to yet emerge from the storied bluegrass assembly line in Bowling Green, Kentucky.

But you should know something. There’s actually a better Vette.

A much better Vette.

There’s just one drawback. While the Stingray (technically the C7, or seventh generation of the all-American sports car) is a deeply compelling motoring experience, the better Vette is a way of life.

It’s the Z06, and it’s a living, breathing supercar.

The stats: 650 horsepower, 650 f00t-pounds of torque. You’ll know this because Chevy has included a small plaque with the data, located on the center console. Other stats: 0-60 in 2.9 seconds, according the manufacturer. And one more stat: Just look at it!

For comparison, here’s a first-generation Vette, a charming little thing: 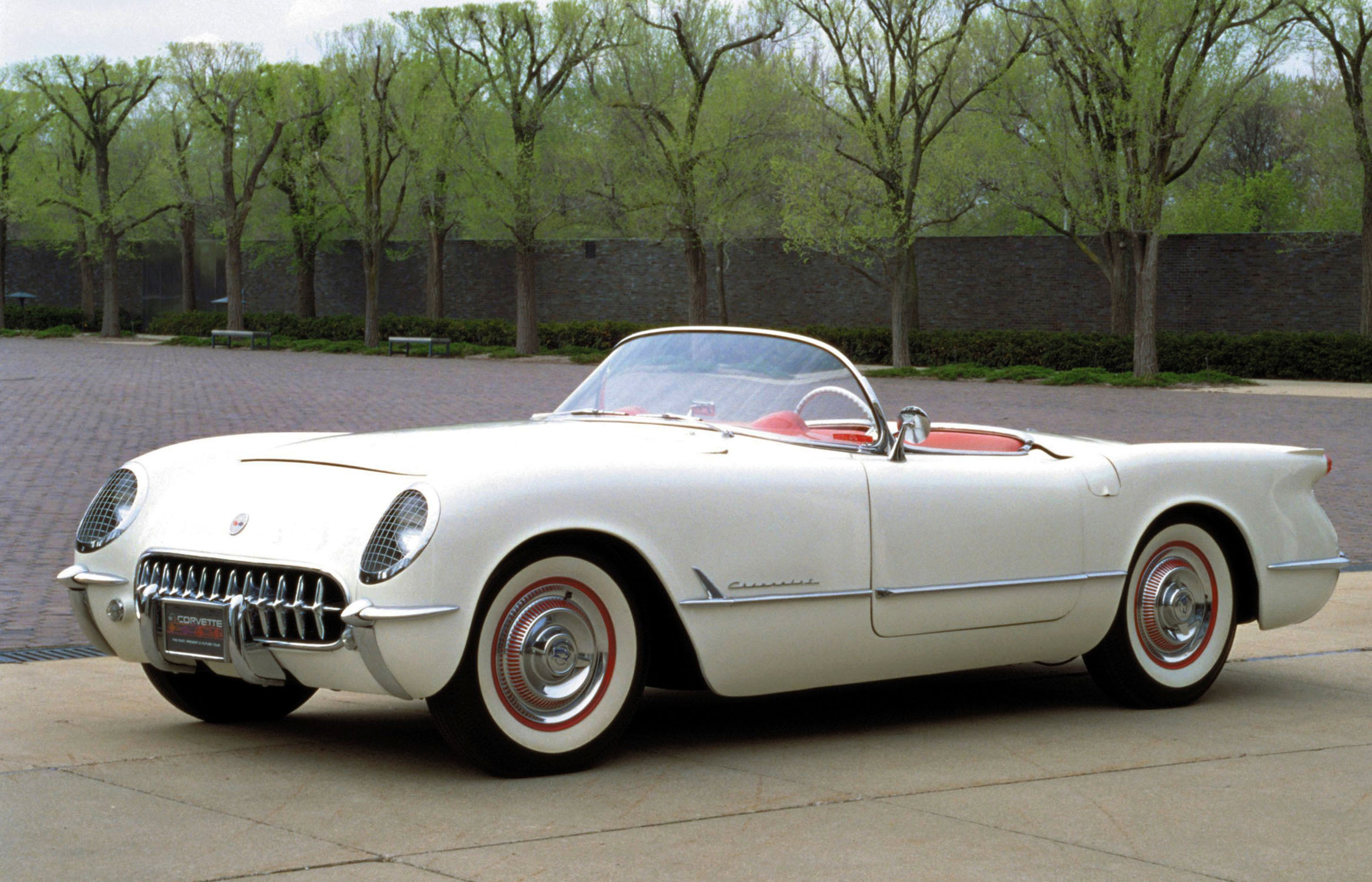 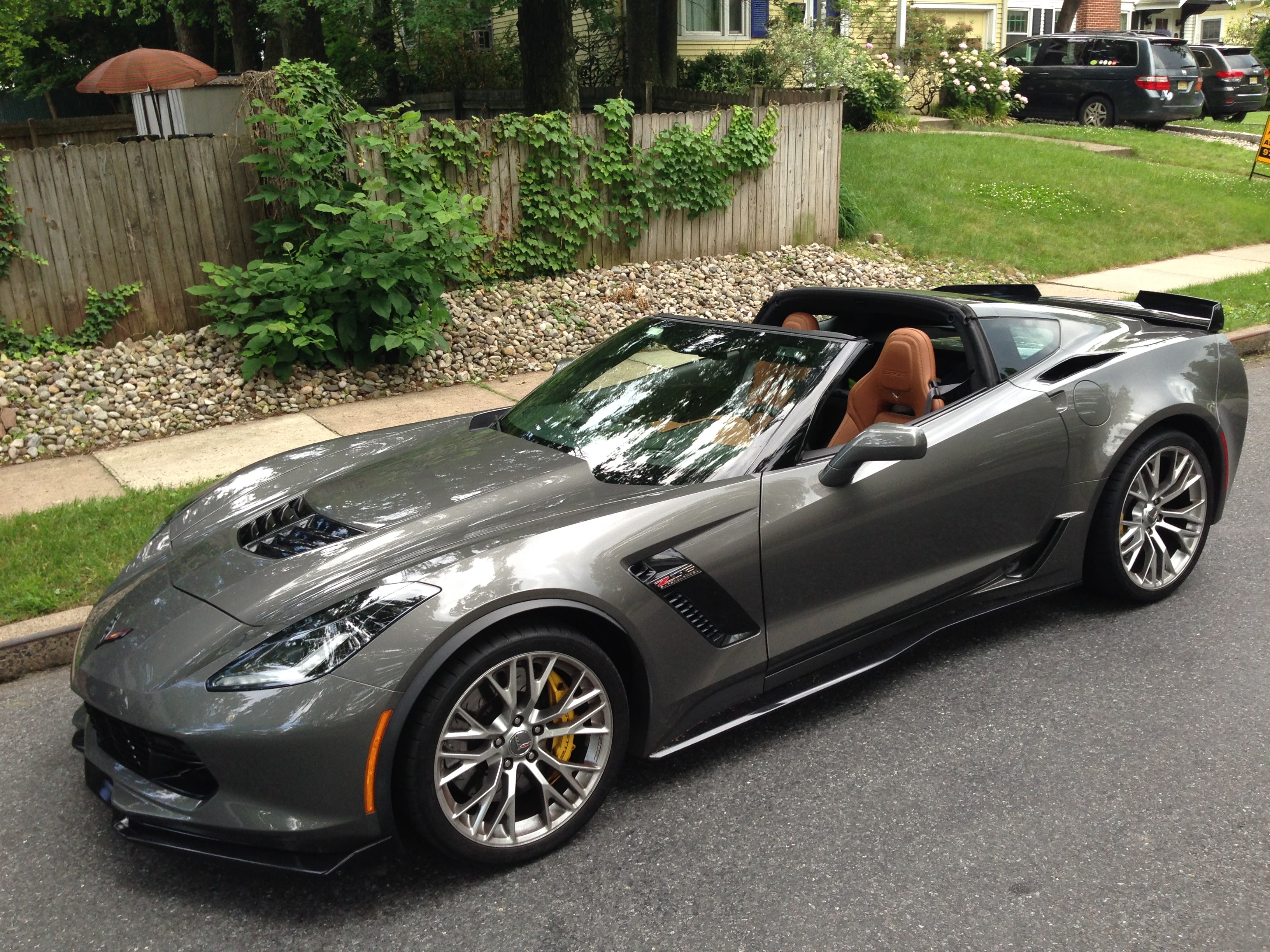 GM let us borrow a Z06 for a weekend, and we took the car and its supercharged V8 engine and its groovy targa roof all the way out to eastern Long Island, then back across Manhattan and into New Jersey. If this sounds like fun, it was.

But it was also an exercise in personal discipline and focus. The Stingray is a Corvette through and through and therefore not a well-mannered Buick either in town or on the highway. But driving it is like piloting a Honda Civic when compared with the Z06’s snarling mechanical dragon, which quite often feels as if it’s powered by a Saturn V rocket that woke up on the dark side of the moon.

The performance is dismaying and actually rather difficult to properly assess without access to a track. When we reviewed the Stingray, we pointed out that for its sub-$100,000 price, you get a car that, although front-engined, could be every bit as much the track warrior as a mid-engined, $270,000 Ferrari 458. A street-legal race car for the budget-minded. 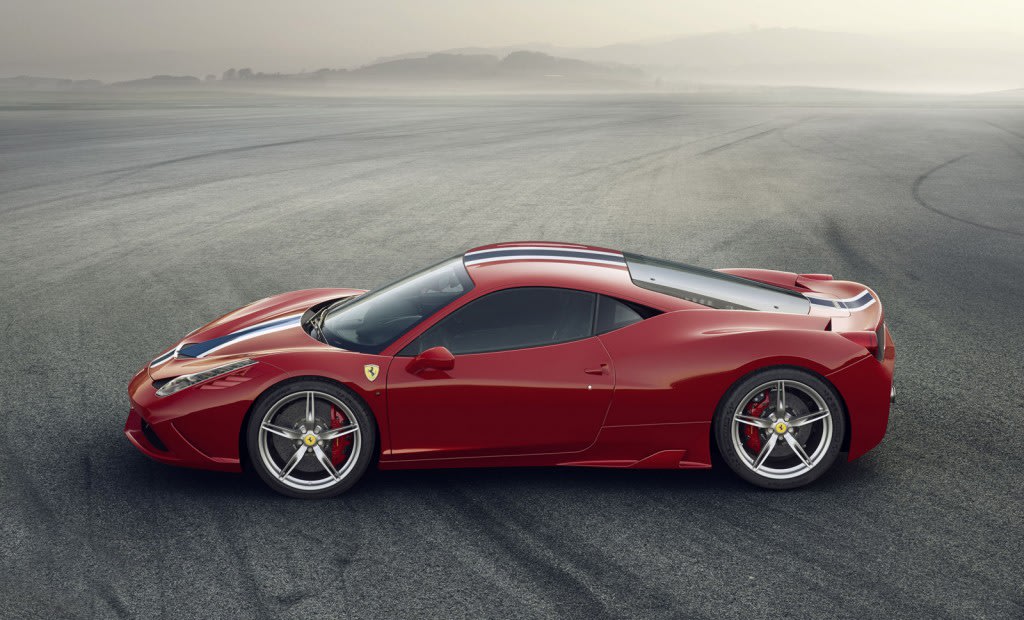 The Z06 also comes in at less than $100,000. High-performance Vettes are nothing new. This Z06 can trace its heritage back to the 1960s, when the designation first emerged. Corvette’s role at GM is to push the envelope.

That monumental LT4 eight-banger is a good example; General Motors says it’s the most powerful engine it has created in its more than 100-year history.

In my case, it was mated to a seven-speed manual transmission (you can also get an automatic) equipped with a nifty rev-matching feature that will rhyme your engine speeds with your downshifts and match them better than you can with your left and right foot. You don’t need to flirt with escape velocities to derive gobs of unholy human pleasure from that powertrain setup.

True, the entire arrangement is specifically designed to take gasoline and transform it ruthlessly and rapidly into raw speed and a sound that will make you curse the quiet. But in mild-mannered freeway cruising, you can get the Z06 up around 20 mpg, which is sort of mesmerizing when you consider that while I was doing this on the Long Island Expressway, a Lamborghini Aventador came screaming up alongside and I thought, “Well, it’s pretty much you and me, bub, on this stretch of road — nothing else can touch us.”

And, for the record, I didn’t act on that knowledge as the Lambo wailed off into the distance, achieving something like 12 mpg for its exertions.
More Stingray

The design of the Z06 is best described as the Stingray with just MORE. More pronounced angles, more aggressive adornments, and more aerodynamic elements. More, more, more. The overall package does feel completely different from the Stingray, even though the bones of both cars are effectively the same. When underway, the Stingray, with a mere 505 horsepower, feels light and flicky. The Z06 feels like it could blot out the Sun with violent combustion. In the Stingray, you smile. In the Z06, you furrow your brow and tighten your grip.

You simply can’t relax in the Z06 — an understandable state of affairs given that this car is completely and totally too much for everyday living. It commands your attention. But the thing only costs about $90,000. This definitely should not be. But there it is. 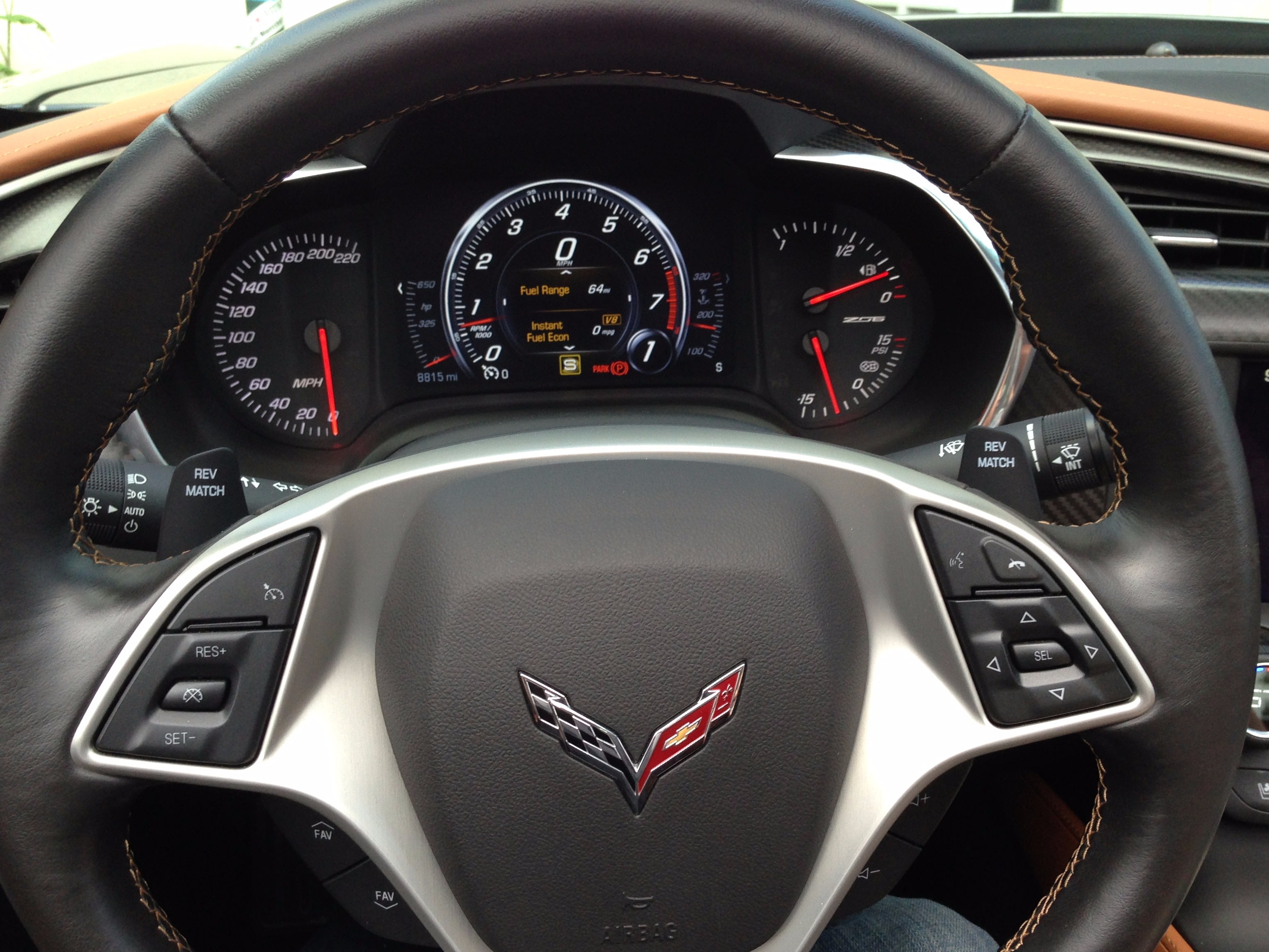 So only thing standing between a lot of folks and a Z06 is the stigma associated with Corvette ownership. In this respect, the Z06 is meant to be something of a trans-Vette. Yes, it’s a Corvette. But it’s a Corvette that hangs out with Pagani Huayras and drinks good tequila. The words “singles bar” aren’t printed in the owners manual. The word “Nurburgring” is.

And believe me, the Z06 is truly a machine that longs for the race track: A few months back, I watched the competition version tear around Watkins Glen International in impressive fashion, being chased by Ferraris and BMWs. (It was the C7.R, the GT racing version of the Z06.) 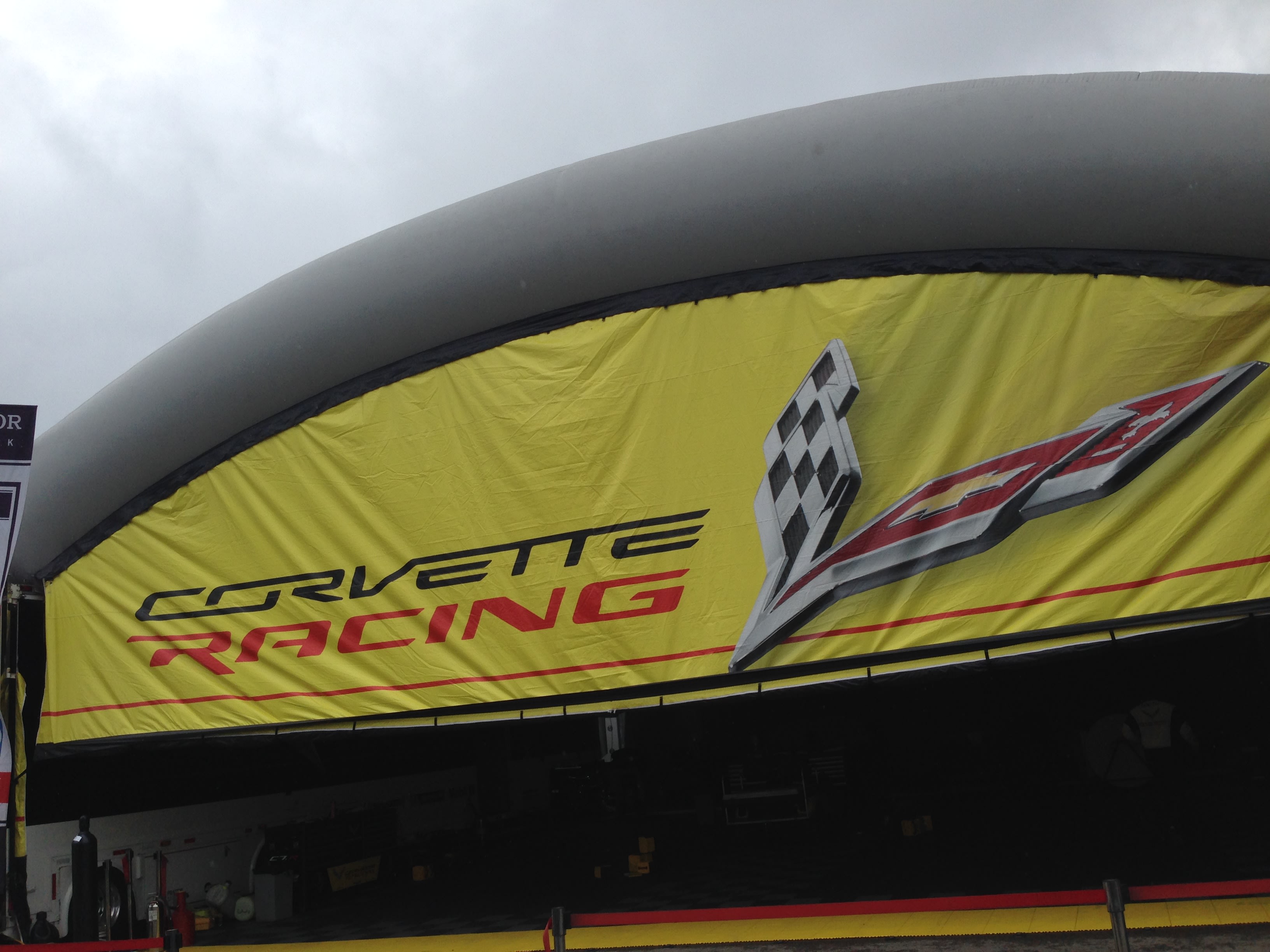 New mindshare for the legendary Vette

Ever since the “Boogie Nights” third-gen Vette established itself in the collective imagination as the preferred vehicle of the male midlife crisis, Corvette has been trying to modify its reputation. The effort has always been honest and determined, but the fact is that it’s taken literally decades. The current Z06 stands at the pinnacle of that undertaking.

That said, it’s hard to tell if it will actually work. When Vettes were for guys going through changes, Porsche, BMW, Ferrari, and Lamborghini were exotic imports. But now the competition is everywhere. It used to be rare to spot a Porsche 911 in the American wild. Now you can’t swing an old crankshaft in Los Angeles without hitting one.

So even thought it’s easier to justify buying a Vette now than it used to be, it’s harder to convince yourself that the car is really as good as it looks on paper. And so those creeping doubts combined with the Vette’s, um … reputation lead you naturally toward Porsche.

However, the Z06, if experienced under proper conditions (that would not be on a 10-minute test drive) is adequately mind-blowing to alter this familiar psychological dynamic.

It’s too early in Corvette’s Generation 7 to tell if we’ve crossed over into truly new territory. The Z06, however, is a departure, and not simply because this is both the most powerful and most technologically advanced Vette GM has ever created. Inside and out, it was designed to mean something new. General Motors examined the epistemology of Corvette, found it wanting, and took the steps necessary to change hearts and minds.

With the Stingray, the steps were huge. With the Z06, they’re gigantic.

Honestly, I think the engineers doth protest too much with the Zo6. They didn’t really need to stretch quite this far, to reach for distant supernovas and figure out a way to reshape them as a drop-top two-seater that sounds like it has eight live volcanoes under the hood.

But then again, you don’t change hearts and minds by holding back.